in this next post in my series on contemporary indigenous artists and the ocean, i will write about an upcoming exhibition at Taipei MOCA

recently i have been collaborating on a sound project with contemporary ‘amis artist, Rahic Talif, to form part of ciRahic’s “space of fifty steps,” which will appear at Taipei MOCA as part of the pulima awards exhibition

“a space of fifty steps” draws on ciRahic’s earlier work, in which he gathered flip flops found on the beach in the wake of the august eighth morokot typhoon disaster. in this earlier work, the flip flops were traces of unknown human lives, perhaps those missing after natural disasters. “a space of fifty steps” builds on this earlier work, in that the process still requires scavenging flip flops and discarded plastic from the beach; however, ciRahic’s current work more closely examines the shifting relationship that ‘amis people have with the ocean. for ciRahic, the project is both a meditation on the meanings of the ocean and also a form of therapeutic practice

for rahic talif, the patterns on driftwood and traces of human and other life on the beach are more than just static features of nature; rather, they are a type of writing that one now strains to read. indeed, says ciRahic, our ancestors were able to read the ocean’s writing, and thus the ocean’s writing contains truths now obscured. although ‘amis still live in the space between the high tide mark and the coastal range, gathering much of their subsistence in the intertidal zone, dependence on the goods and knowledges of settler colonial society has made them forget the ocean’s writing. the ocean and the coastlands no longer communicate with us, and we no longer care for them 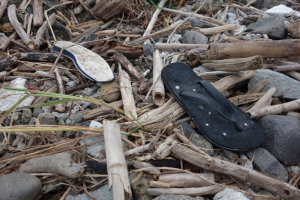 ironically, ciRahic’s project to recover the ability to read the ocean’s writing relies not upon natural materials, but on flip flops, the refuse of an industrial society that displaced an ‘amis understanding of the ocean as animate, vibrant, and life giving. nearly daily, ciRahic visits the ocean to observe and gather flip flops either discarded on the beach or elsewhere, which somehow come to rest on the beach. visiting sites along taiwan’s entire east coast, he stops when he has found a flip flop and begins to observe his surroundings, creating a narrative for what he has found. for example, the flip flop could be faded, showing the signs of a long journey; he may ask, how long did you float before you arrived here? do you miss your home?

eventually, he stamps an image of the flip flop onto a canvas, drawing what he notices in the surroundings and writing a few words that crystallize his dialogue with the ocean, prompted by the flip flop:

pina’on! aka kapolin!–watch out! don’t fall over!–ciRahic writes to a few coconut trees that look as if they might pitch into the water

these messages appear on the canvas, but are traces of a larger dialogue. these dialogues are situated in the context of alcoholism and a type of anomie in ‘amis communities, signaled by gout and garbage. visiting home during the annual ilisin, or harvest festival, of his home community of makota’ay, ciRahic told me how it pained him how old his age mates appear, how their bodies mark days spent drinking. if alcohol is a hopeful substance, something made from surplus grain with hopes that one will have enough to eat between harvests, then drinking is a symptom of unbalanced hopes, a kind of surfeit or lack of hope experienced as dependence. besides its traces in the bodies of his age mates, ciRahic has only to go to the beach to confirm his sense that something is amiss: just look at all of the fragments of paolyta b and miciw bottles, along with other trash, strewn along the beach. even the site of the ocean ritual is surrounded with trash. ciRahic asks, “have we forgotten how to reverence and care for the ocean?”

and yet, the ocean transforms what it takes from us. seaglass, for example, might be the polished fragments of miciw, paolyta b, and taipi bottles. the glass is originally something that could injure someone, says ciRahic in a taitung lecture, but the ocean’s action is to wear and polish it, making it touchable and and beautiful. the ocean can perform the same therapeutic work for the social body. what must we do then? return to the lalan no ‘orip ita, the way or road of our life, that space of fifty steps near the ocean, where we can speak with the ocean. we will need to listen to what she might tell us. “a space of fifty steps” is an experiment in this therapeutic work

as such, the pieces in “a space of fifty steps” are precipitations of dialogues with the ocean. as rahic talif gathers his material, he speaks and sings, improvising lyrics on what he sees and telling stories, some personal and others from ‘amis oral history and mythology. generally, he draws an image of what he sees in front of him while he sings, stamps an image of the flip flop tread on the canvas, and then writes a condensed version of his dialogue. the songs and narratives begin with the situation and then branch out to larger questions concerning the environment or the condition of ‘amis communities. thus, an observation of driftwood following a typhoon might lead to an observation that no one gathers driftwood any longer, except for a few artists, who sell driftwood carvings to ethnic chinese tourists. this observation then becomes a song about the disappearance of young people from ‘amis communities and the longing of the land for its children. although ciRahic engages in ecocritical practice in his art, it differs from the kinds of scenery or purity driven consumer environmentalism in that the ocean, to ciRahic, is a full partner in the dialogue and not a beautiful object for human contemplation. moreover, ciRahic employs garbage as a material that can be transformed through the ocean’s transformative labor. the ocean, in its receptivity and transformative power, thus teaches us how to live through ecological catastrophe and other calamities of industrial capitalism

at the center of “a space of fifty steps” is thus what jonathan lear has called “radical hope”. indeed, rahic talif’s work is ironic, because the material forces one to admit that one cannot really know how to be ‘amis in the contemporary context. one only knows that what it might mean to be ‘amis when the ocean has fallen victim to climate change will be very different from what we might understand it to be now. and yet, even in this context, one might still make an appeal to an ‘amis identity, caring for oneself through care for the ocean. similarly, garbage is not particularly amenable to traditional treatments. in employing it as a medium, ciRahic poses questions of how to survive as ‘amis in a society that has forgotten the ocean’s writing. actively collecting the detritus of a misaligned relationship with the ocean, transforming them into art, suggests a form of survivance through remediation: a hope that one can become into ‘amis who have lived through environmental catastrophe but who still remember that their mother is the ocean

in my work with rahic talif, i wished to give viewers of his pieces, which are traces of dialogues with the ocean, an experience of these dialogues as they unfold. recording a few hours of footage with ciRahic on the beach and employing several other recordings of the ocean and ceremonial songs around ‘atolan a niyaro’, i began to make a 20 minute piece suitable for installation alongside ciRahic’s sculptural and ink on canvas pieces. the ocean would have to occupy a prominent place in the mix, as would the notion of dialogue. but, of course, we cannot really hear the ocean responding to ciRahic’s songs. to give a sense of dialogue, then, i played with the position of his voice, layering his songs and spoken dialogues as if they were coming from different locations. to give a further sense of his work as dialogue, i also included a ceremonial song that ciRahic mentioned in his talk about the ocean’s writing. i hope that this work will give those who hear it an experience of rahic talif’s work as a process rather than finished pieces and perhaps will permit some feeling into an ‘amis affection for the ocean

“i came here once as a child” piece from rahic talif, “a space of fifty steps.” ink, canvas, found plastic flip flop