during the last month, i have stepped away from writing articles to work on an art installation for the international austronesian art awards in taitung. it is piece made from sound and found objects that focuses on memories of pacifalan, a contested sacred site in ‘atolan ‘amis country, where i currently perform ethnographic work. during the work on the piece, i’ve tried to reflect on how art and writing converge as well as diverge–as well as get a sense of where working as an artist is a bit tricky for an ethnographer

ever since encountering soundwork by steven feld, not to mention the poetry of my late advisor, paul friedrich, i have taken seriously the claim that ethnography need not be a single modality of academic writing but can encompass a family of related writing and creative practices. aware that ethnography often maintains tension between scientific and creative values, i nonetheless have worked to create sound installation pieces that move beyond the strictly documentary. in other words, my soundwork intentionally layers, repeats, and juxtaposes voices in ways that confound the listeners desire for the work simply to represent the world or to present different positions or worldviews. at the same time, my work focuses on language. it is no secret to a close listener that one of the models for my work has been hip hop 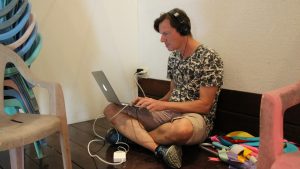 but what might my work have to say about art and modalities of ethnographic practice?

the austronesian art awards shifted the focus of the work much further than my normal practice of making sound pieces. throughout the mounting of the exhibit, i noticed a real tension between the way that i felt compelled to create the space for hearing the work, one that did veer toward verisimilitude, and the space that art curators would want. indeed, the curators said of my first attempts to put the space together that it looked a bit too “museumish” or “documentary.” on the other hand, they wanted a bit more explanatory information on what the central item in the space was–the dance umbrellas once employed in the ‘atolan ‘amis kulakul (warrior dance)

i found this conflict to be an interesting one. on the one hand, i wanted to leave a space for interpretation more open; rather than explaining what the umbrellas were and what they signified, i hoped to leave them as curious, uninterpreted markers of an ‘amis historical presence that visitors could pick up (or not). although my own preface to the work referred to the umbrellas briefly, it stepped away from giving the context of disputes concerning their discontinued use in the ‘atolan community and only touched upon the relationship of the umbrellas with an ‘amis masculine aesthetics. nonetheless, my creation of the exhibition space tended to have a documentary look. the curators picked up on the documentary look of the space and viewed it unfavorably, but wanted a bit more explanation of the objects in the space as objects related to a specific cultural context. strangely, where we would perform the work of interpretation diverged 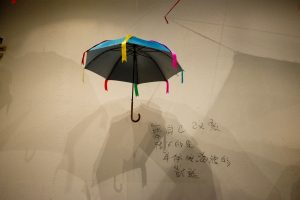 “the props have already changed. what remains is the dialogue of our bodies with the ocean” detail from hatfield 2016 “o wahidang no riyar” sound and found objects. sound: 40 minutes. dimensions variable. photograph courtesy taitung museum of fine arts

i wonder about this divergence, because in my work as an ethnographer i certainly would have shed much ink on the known history of dance umbrellas and their relationship to ‘amis clothing and age set organization. in fact, i had written an article on these umbrellas just before creating the art installation in which i performed such interpretive work. the curators wanted more of this kind of interpretation than i was willing to offer, and ultimately i did not write more on the umbrellas than the few phrases included in my introduction to the piece. overall, i think that the reason for my reticence is that i wanted the umbrellas in their juxtaposition to other elements in the space–and particularly the sound installation which was the center of the work–not to be captured in an “ethnographic” space. in other words, i did not want the work to represent ‘atolan ‘amis culture but to employ ‘atolan ‘amis culture to pose questions about a broader cultural condition. for me, the umbrellas, discarded except in the memory of those who formerly danced the kulakul indexed not an ‘amis quandary but opened space for reflection on the role of abandoned material culture in relationship to the politics of tradition. so for me, the problem of creating the piece was how not to bind the objects too closely to a single cultural space but to create something interstitial or troublesome

one might ask whether the role of theory in ethnographic work aims at such an interstitial or troublesome space, particularly the space of questions within the disciplines of anthropology and ethnomusicology. to this question i would likely say yes. and yet, it seems to be that the way to do theory in ethnography is through either interpretive or comparative work–just the type of work that i wanted to avoid in making the piece. still, i wanted the umbrellas to have some spatial resemblance to how they would appear if they were used in the kulakul, a resemblance that the curators found more fitting for a historical museum context than a fine arts one. to me, this suggests that in many ways the interpretive logic of ethnographic practice tends toward the spatial, whereas my art curator friends were more invested in objects in their relationships. these are two different deictic strategies

that said, the shift to working in the fine arts context was an interesting one. although my work is mainly in sound, putting the exhibit together required much attention to visual aesthetics; to me, the strangest revelation had to do with the importance of lighting. also curious, once i thought about it, is that the soundwork will be heard by a primarily ethnic chinese audience who do not understand sowal no ‘amis, the language in which most of the voices recorded for the soundwork speak. unlike in writing contexts, in which i would necessarily translate and examine closely the poetics of the conversations and speeches recorded for the work, here i had to rely only on sound qualities of the voices to create the piece. how would layering and repetition suggest what i wanted to suggest to listeners?

again the contrast seems to be the role of interpretation. still this divergence does not come down to a contrast between over interpreted ethnographic writing and a lack of interpretation in art making. creating art in any medium requires interpretive work, both in the sense of bringing an understanding of the medium and how it will communicate to viewers and in the sense of the relationships between this particular piece and a broader set of works through which an artist and her audience will understand the piece. the problem for ethnographers working in this context thus might be usefully considered a doubleness of the ethnographic art work as having a relationship to research practices toward which the ethnographer might gesture (or not) and to the conventions of artistic practice. the major difference here would seem to be the role of documentation. and yet many indigenous artists on taiwan today engage in documentary practices 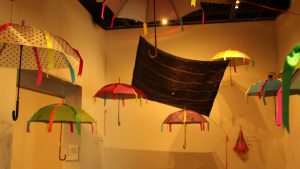 where are the dancers? and what of the umbrellas? detail from “o wahidang no riyar” photo courtesy joey lin, taitung museum of fine arts

several years ago, behar asked whether there was an art in ethnography, meaning primarily the writing of ethnographic texts. much of her observations about the relative lack of art in ethnographic writing centered on disciplinary investments in a particular image of the discipline as scientific, as well as the scant practice most ethnographers have in creative writing. the movement toward art as an ethnographic practice has been antedated, i would argue, by the work of ethnographic film makers and by museum anthropologists. in my work, i discovered that the shadow of museum practice exerted more influence than i might have first thought: perhaps the space offset the lack of a referential chain leading back to the context of recording, something that i resolved not to give listeners in the soundwork? you will be pleased to know that i listened to the curators and paid greater attention to the distribution of the umbrellas according to visual interest. when the exhibition opens, i hope that visitors will ask why the umbrellas lack dancers, why the umbrellas hung throughout the space are new while the chairs and other objects old, and why i have written and erased in several layers on the walls of the space. much of the work of creating the art piece, it turns out, were less about information to be communicated than the questions i want visitors to pose. this, too, is a modality of ethnographic work, but one i still have to master 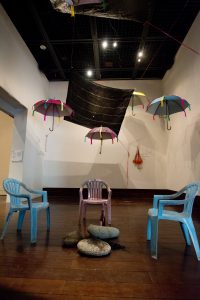