what are the stakes in the revival or reformation of ritual? to answer that question we might ask
(1) what kinds of stances do particular revivals or ritual practice afford, and
(2) what kinds of authority give a warrant for such revivals?

if you are like most people and don’t know much about ‘amis aesthetics, you would be excused for finding the kulaklul a bit more tonari no totoro than martial. complicating things a bit, there is some evidence that the current form of the kulakul derives from the japanese colonial period: as related around ‘atolan, there were only two japanese police officers in the village; and the colonial government, fearing the armed young men dancing in formation, compelled villagers to switch the spears they originally brandished for less threatening umbrellas

and yet, one could argue that the umbrellas afford an ‘amis masculinity better than spears. brightened with the addition of colorful streamers, dance umbrellas flutter and shimmer. in combination with bells and other components of young men’s regalia–not to mention the strength and beauty of young men’s bodies–the umbrellas bundle lightness and brilliance with internal qualities of strength, tenacity, and finesse

when one sees the kulakul performed well, one cannot help but to exclaim, “makapahay” (beautiful) or “wata, o kapah no niyaro'” (ah, the village youth!). see the resemblance between kapah and makapahay? right–the word for young man, kapah, is the root word of makapahay, beautiful. because the umbrellas have kakapahan, beautiful or young man qualities, they afford the ritual expression of youth within a martial framework. through the umbrella, the kulakul bundles the martial within beauty in a particularly ‘amis way. in this fashion, what might otherwise be considered a colonial imposition on ‘amis ritual turns out to be the focus of emotional attachment for men who have mikulakul and for village women, particularly the mothers of current mikulakulay

still, your probable reaction to the kulakul generates a counterargument: kulakul in its current form does not afford a desired effect of external recognition, a kind of imposing quality. let’s just use the vernacular here. the dance is not badass enough, a problem when ‘atolan ‘amis engage in practices where being badass is important–like protests

and, right, there is the problem of a colonial derivation of sporting umbrellas rather than wielding spears. is that ok for a dance considered traditional? is it “traditional” at all? some, even around ‘atolan, might say, “not really”

after a few years of grumbling and speculation, there seems to be a consensus among ‘atolan ‘amis residing in taipei and kaohsiung that the umbrellas should be discarded. many of the mikulakulay, the village youth, agree

on the day of the actual protest at pacifalan (back in the ‘atolan community), youth danced with umbrellas, held in the left hand, as has become customary. it is likely that community elders would not have countenanced spears

here we see two different kulakul with two different kinds of affordances. although picking up spears requires a gesture to tradition, this gesture does not settle arguments about propriety or aesthetics. those in favor of umbrellas might justly point out that the audience for spear wielding kulakul is not an ‘atolan ‘amis one; they might not care how this audience interprets the dance or even desire this audience. those who would pick up spears can, for their part, argue that the umbrella camp have been duped by colonialism

in other words, because revivals of ritual practice are often articulated with the politics of decolonization, it is not surprising that appeals to tradition, sometimes grounded in empirical or archival research, often figure in authorizing gestures. it’s in this context that the kakitaan (community headman) elect published a statement in the 15 april 2015 edition of the community’s occasional newsletter, o ngiha no ‘atolan

[….] the japanese, afraid of the sight of youth wielding spears, forbade youth from carrying spears in the dance. i hope that in the future the community’s youth will dance with spears as did our ancestors a long time ago. this is my hope–to bring back our tradition (o ngiha no ‘atolan v 10 p 1)

it’s time for a confession. when i first read the statement, i was pleased. after all, dancing with spears is traditional; and, in spite of my warnings to the contrary, i am still a bit of a sucker for neo-traditionalist appropriations of ritual

i wonder just how the few people who make regalia in ‘atolan will catch up with orders once inundated with requests for a couple hundred spears, not to mention what might the right girth and decorations for such a spear be. so i’ve asked around: do you think that the mikulakulay carry spears this july?

spears…that’s the ticket! this will shut up those rival ‘amis up in makota’ay, who enjoy ridiculing ‘atolan ‘amis as somewhat effeminate. in short, i was looking forward to the mikulakulay brandishing weapons 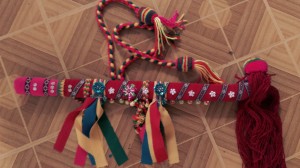 tricked out sword: part of youth regalia, the sword makes one wonder how a spear would be decorated for dance. spear constructed by rihom. photograph: djh

as is usually the case, i should have listened around before getting so excited

a couple afternoons following the release of the newsletter, a group of middle aged and senior women were sitting around my ina’s betel stand, cooling off with a few beers. as they discussed the kakitaan elect’s statement, i realized that gestures to tradition do not always have the intended effect. the women thought that the appeal to tradition was not a warrant for a change in customary practice. the kakitaan is listening to much to the youth and to “taipei people,” they said

what did they mean? to begin with, they argued, the most avid spear carriers do not live in the community, but have lived most of their life in taipei. what was the kakitaan doing listening to them and not to community elders who reside here? the women described carrying spears for kulakul as ugly and awkward, and most damningly, political:

to the women, spear carrying articulated not with ‘amis aesthetics or community life but protest movements, movements that have enrolled many community youth, but that fail to represent “us,” the community. again, the location (what i might wish to call the project of scale) of spear carrying is “taipei,” here meaning urban taiwan generally, and not the local ‘atolan community

these questions of scale or location can easily be mapped onto ethnic stereotypes. thus, one of the women, who arrives late, asks what we are talking about. an “auntie” had already thrown the newsletter onto the ground in disgust, but she passed it on to me and said, “a-te aw, read it!”

i read part of the statement to the latecomer

“ugh,” she says. “we ‘amis wouldn’t carry spears to dance! only manowan or pariwan do that!” she names two ethnic groups ‘amis traditionally considered rude folk. “the only time the youth would carry spears in the past was when they would go hunting for wild boar up in the mountains. we wouldn’t carry spears otherwise. not for the kiloma’an festival” 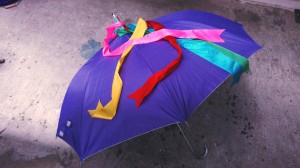 a dance umbrella. both the use of color and the streamers reflect an ‘amis aesthetics

at stake here seems to be an image of ‘amis versus other indigenous groups. an indication of these stakes appears in the press conference clip above, as well. the caption for the press conference mentions 出草 chu cao, a mandarin word for headhunting raids. and yet, ‘atolan ‘amis never practiced headhunting, a custom that they attribute to neighboring groups, whom they considered unsavory and violent. one of the affordances of spear carrying is then an articulation with pan-indigenous movements, which employ the metaphor of headhunting for political effect. but it is precisely such a politics that the senior women, drinking beer at my ina’s betel stand, rule out. they would rather have “beauty”

it’s still not clear whether the youth will dance with spears or umbrellas this coming july. whatever happens, the case demonstrates how the choice of props matters for a politics of scale. to conclude, although the women sitting at the betel stand frame their arguments in terms of the “local” versus “taipei,” it turns out that the spear wielding advocates, who circulate in diaspora, actually have a better chance of defining the “local” (i.e., ‘atolan ‘amis culture) than do the women. for this reason, we might ask about what sorts of authorization can ground credible performances of local tradition. sustained local residence and real competence in the local language are not sufficient

a further complication by way of footnote. umbrella or other implement wielding kulakul can feature in projects of scale well beyond the community. see, for example, the following clip, from a music video by suming rupi. here, the practice of kulakul at sites around the globe situates a kind of ‘amis cosmopolitanism