*note: some of this material reworks and rewrites some earlier appearing on this blog, but with a slightly different perspective

We can see what Lear has called radical hope in ‘Atolan and other coastal ‘Amis villages. Traces of this hope are visible in nearly any concrete house. Because building solafo entangled local desires for a better life with government programs for the reformation of “plains dwelling mountain compatriots,” as ‘Amis were called until the success of campaigns for official recognition as Taiwanese Indigenous Peoples in 1994, solafo mediate between local conditions and state projects. In this guise as a medium, solafo demonstrate how hope articulates with hegemony.

Whether we consider the construction of solafo or participation of ‘Amis men in the far ocean fishing trade, we see evidence of official attempts to mobilize indigenous people in assimilationist projects.

A 1972 Executive Yuan document instructed government agencies entrusted with the movement to reform the lives of “plains dwelling mountain compatriots” to provide guidance to indigenous people, so that they would build durable, hygienic, and comfortable concrete houses to replace “temporary” structures built from bamboo and thatch. The document, like others, also described the practice of uxorilocal marriage–then still normative in ‘Amis communities–as an “evil custom.” People around ‘Atolan remember that as late as the mid-1980s, the township and county governments held contests that judged which families, neighborhoods, and communities had done the most to improve their lives. The number of concrete houses was one of the rubrics for judging the competition (CITATION).

In 1976, the Ministry of Education cooperated with the Kaohsiung Fisheries Association and far ocean fishing companies, whose boats faced a labor shortage. The MOE issued a memo to schools instructing them that middle school aged boys who planned to enter the workforce after graduation should be encouraged to enter the far ocean fishing fleet. ‘Amis men who attended middle school in the mid- to late 1970s have told me about implementation of this policy–free physicals and introductions to men who made profits far oceaning–as well as their own parents’ insistence that going on the boats was the best way to make a living.

When I ask men who went far oceaning why they normally built houses from their income in the trade, they often reply that they wanted to build a durable house for their family, to give them a more comfortable life. The convergence of language surrounding houses, with the men nearly repeating keywords in a government document verbatim, suggests the KMT party state’s hegemony. However, we should remember that hegemony requires a sense of shared interests and generally a kind of complicity across class and ethnic lines. In their enrolment in state projects to reform their lives, ‘Atolan ‘Amis responded to more than just the government; a combination of factors, including memories of a 1952 fire that destroyed most of the village, gender ideologies, and contradictions within the community’s kinship structure, all contributed to the appeal of solafo for ‘Amis people.

Their passion for building these houses issued from their limited freedom to desire modernity. In the context of an education system and other institutions that proscribed their language, domestic spaces could both signal their status as good, modern citizens and provide space for their strategies for cultural reproduction. Indeed, the iconicity of solafo with other concrete houses disguises the life of age sets, kin groups, and other ‘Amis social structures from view. And constructing solafo would realize a kind of hopeful indigeneity whose forms of life are still emerging, even as they appear out of step with modes of public participation now urged on indigenous people in today’s multicultural Taiwan.

The problem of understanding solafo, then, is not just their relative invisibility. Rather, it is that in a world where multicultural discourses predominate, our sentiments often lie with neo-traditionalism. Given our own political commitments and understanding of culture, it is far easier for us to distribute and consume narratives of cultural survival. Architecturally speaking, we would like to see more bamboo and thatch structures, such as those constructed for a variety of purposes, including tourism, cultural performance, and the revival of traditional ritual practices. 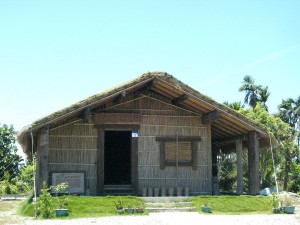 what we want to see? reconstructed ritual house in tafalong

I must admit that the symbolic reconstruction of a traditional ritual space, complete with reproductions of the original wooden carvings and a ritual to carry the ancestral spirits from the original carvings (still housed in an ethnological museum in Taipei) back home to Tafalong, would seem to deserve our support and applause. I, for one, welcome the work of these activists

And yet, I want to cheer for that stairway, which after 30 years still anticipates the future second floor. That staircase will never be co-opted by mainstream society. It is a faithful reminder of the radical hope that still animates Taiwanese indigenous communities.