here is the first part of a translation, with some added explanatory material, of the post over at guava:

where is this stairway going?
Nearby my residence in ‘Atolan, a Taiwanese indigenous community on Taiwan’s East Coast, there is a simple, flat-roofed house. The house, constructed of steel bar reinforced concrete, resembles nearly any other solafo, or concrete slab, houses you might see around this town, which faces the Pacific Ocean. Sand for mixing the concrete likely came from a stream mouth not too far north of here, and the house required no outside contractors: men who had worked construction abroad–some in Japan, others in Singapore or even the Arabian Peninsula–gathered to assist the house’s owners as they made this bold step into modernity. The family had previously lived in a bamboo and thatch house, as had their ancestors for generations. Most passersby do not give this flat-roofed house a second glance. But when you walk into the house, it is hard not to notice a staircase between the living room and kitchen.

And for the staircase? It waits for the future second floor.

In 1978, after three precarious years in Taiwan’s far ocean fishing fleet, the house’s owner finally returned home. Like most ‘Amis men his age, he had traveled across the Indian and Pacific Oceans, as far as Uruguay, with stops in Singapore and Cape Town. World markets increasingly hungry for sashimi grade fish had sent them in pursuit of tuna and swordfish. The owner of the house was fortunate to earn enough to build a new house, but his family ran out of funds before they could construct a second floor. Not to worry–the staircase would maintain the family’s hopes. From the time the family moved in, the staircase had led upward toward that second floor, which they have wanted for more than thirty years but never managed to build.

The staircase gives access to the roof, convenient for sunning mattresses or hanging clothes out to dry. Still, the roof was never the point; these days, the staircase usually helps out the owner’s wife, letting her pile along its length those items that the family hardly ever needs but hasn’t the heart to throw away.

The staircase has begun to wonder if the family will ever let her fully express the meaning of her existence. Some of the family has been living in Taipei, some in Kaohsiung or other urban centers for quite some time. With a family like that, what is a staircase to do?

Staircases cannot up and move to the city. So the staircase has resigned to her lot: waiting and waiting. She has heard that the family might build the second floor a year or two from now, now that the owner’s wife has moved back and begun to run a restaurant in what was the living room. So the staircase keeps up her hopes. Besides, she has become accustomed to the life of a silent index–maybe an anticipatory witness–of the family’s better future life.

With her, the family won’t lose their hopes. 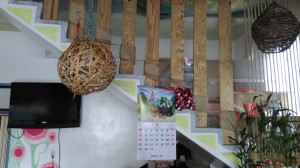 staircase to a future second floor. 2015 in ‘atolan. photograph by djh

If you were to come to ‘Atolan, I doubt that you would notice the staircase or the house in which she has waited, more than 30 years, for the future second floor. I cannot deny that the solafo house looks too much like any other steel bar reinforced concrete house built in rural Taiwan during the 1970s and 1980s.

Although I have tried to discover some cultural inflection that I might interpret as a symbol of ‘Amis identity or resistance to settler colonial society, I’ve failed in that task. Whenever I have mentioned the steel bars left protruding from the roof, the better to build a second floor when funds permit, people have always commented that they have seen the same architectural feature elsewhere. A Taiwanese anthropologist told me that he has discovered this feature in the Toroko communities in which he has worked. Other friends have shown me the telltale steel bars protruding from roofs in other Taiwanese towns. Yes, you can see them nearly anywhere you look: This sort of architecture is not limited to indigenous people, or even to Taiwan, it turns out.

“You can even see them in Turkey,” said one of my better-traveled associates.

We will not find cultural difference in the architectural details. Solafo houses in ‘Atolan resemble those in other Taiwanese indigenous communities, and have very little to distinguish them from similar houses in rural villages throughout Taiwan or even in other parts of the world where people started to build solafo in the 1970s and 1980s. ‘Atolan’s solafo maintain an iconic relationship with other modern houses of similar vintage. It’s when we fail to notice them that they fully express their meaning. Through these houses, their owners, who had suffered from both institutional discrimination and informal prejudice, escaped stereotypical images of “primitive and isolated savages” projected upon them by mainstream society and embarked upon a fully modern domestic life. When we do not notice the houses, they communicate something about this attempt to become modern and indigenous to those included in the community. You are a visitor here, so you need not bother to see them.

Did you expect the community to live in bamboo huts? the stairwell might ask you. The houses are icons of modernity.

Because the houses do not exhibit cultural difference, an anthropology that depends on the Other as the object of its discourses cannot readily draw them within the scope of its research. The houses can never become a circulating token of indigenous identity. However, the cultural value of the houses is precisely that they do not exhibit cultural difference. What can we do? We can look carefully at the different floor treatments in parts of living rooms built at different times, examine tile surfaces in which one can see the progression of tile styles over a ten or twenty year period, or walk up a staircase that has waited 30 years for a future second story. Then, we will gradually discover a history of a family’s experiences and their feelings toward them; even if the owner is forgetful, indices of their hopes still remain, the staircase is still awaiting the second floor.

The hopeful staircase has its own family of related objects, which express hope in several different media:

These objects are all carriers of hopeful indigeneity 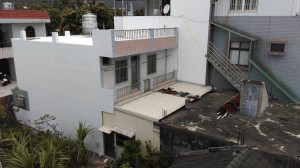 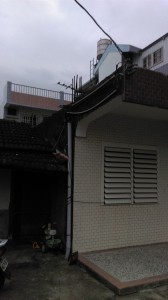 hopeful houses. houses show their histories of construction, but also hopes for the future. 2015 in ‘atolan. photograph by djh