one thing that no one ever tells you when you go to do fieldwork is how important it is to pay attention to furniture. recently, much of my observations at events in ‘atolan have been of chairs and tables. every household worth the name has several round tabletops and folding leg brackets, plus a set of chairs–enough to seat at least 40 or 50 adults. the furniture comes in common when the family has to host an age set, family, or church gathering. by watching how people move around the tables and chairs, moreover, one has a sense of how ‘atolan ‘amis (re)constitute social groups in the various activities that bring them together. but “reconstitute” might be too heavy a word. as tables and chairs move around, ‘atolan ‘amis actively play with the social categories they recognize, along with their interrelationships

like many austronesian societies, ‘atolan ‘amis have complementary spheres of gender. although ‘atolan ‘amis no longer practice uxorilocal residence,  relationships among fafahiyan (women) and fa’inayan (men) are structured by the dominance of women in kinship organization and that of men in the age set system  (which, organized as a set of fraternal paternal relations, is the male counterpart to kinship). these two spheres, one of family groups and the other of the village, are gendered as female and male respectively. in addition to this complementary system, gender relations tend to a playful competitiveness

for example, on a christmas day gathering at the catholic church courtyard, elderly men and women sat at separate tables nearby each other; the tables of the middle aged women and men were on separate ends of the courtyard, with a single table for all of the youth undivided by gender between them. after meals or in periods when the elders will give speeches and the constituent groups–all the men, all the women, youth, middle aged people, residential divisions–performances, the young men will break down the tables and everyone move the chairs into a large circle

sometimes the tables will remain, and the table seating retains divisions within the larger group. on christmas day, once the formal portion of the day’s proceedings ended, the tables, which young men had put away, came out again, particularly when the county council representative, one of the middle aged women, came with several bottles of a sweet japanese red wine consumed primarily by women. the middle aged men gathered around their own table with paolyta b and rice liquor. then competitive play began

the women began by performing several choreographed dances, primarily for their own enjoyment, but also as a bid for the men to present their own piece. the women performed a parodic, if often convincing, version of the wonder girls smash hit, “nobody”

those of us watching admired the performance, particularly the contrast between the earnest quality of the dance line and the woman dancing with akadama sweet wine boxes as improvised props. the women danced, in part, to convince someone (perhaps even of their own group), to buy a bottle or two more. at the same time it was a taunt of sorts to the middle aged men, urging the men to get up and perform. the men responded with their own song, which made fun of quarrelsome old couples: 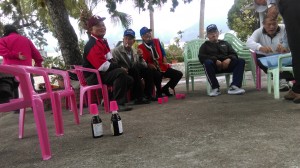 the men performed the song to the amusement of the elderly men and women present; and both groups joined in, even though it made fun of members of their group (by name). that the first man targeted by the joke danced and sang with the middle aged men as they performed added to the self-deprecatory quality. linking the song with a traditional dance piece associated with adolescent boys ensured that everyone would laugh and sing along

not to be outdone, the middle aged women, who sat around a table on the other side of the courtyard, began to cheer for those who brought more of the akadama wine: we will drink all of her wine!, they sang, tonight, we won’t go home!

these two songs became refrains that punctuated activities into the day. interesting to note is that these performances began as ones in the center of a circle of chairs in which the elders sat (in the center of the courtyard) and later became shouted songs sung toward the opposing group, who sat at a table on the opposite side fo the courtyard

similar making of common space and divisions by categories punctuate both formal and informal events around ‘atolan. it is, in many ways, a repeated pattern created with the help of furniture, that weaves people together even as it reproduces their differences as members of complementary (gender) or hierarchically stratified (age) groups. watching furniture move around thus is a useful method for observing social structure expressed materially, in often playful ways