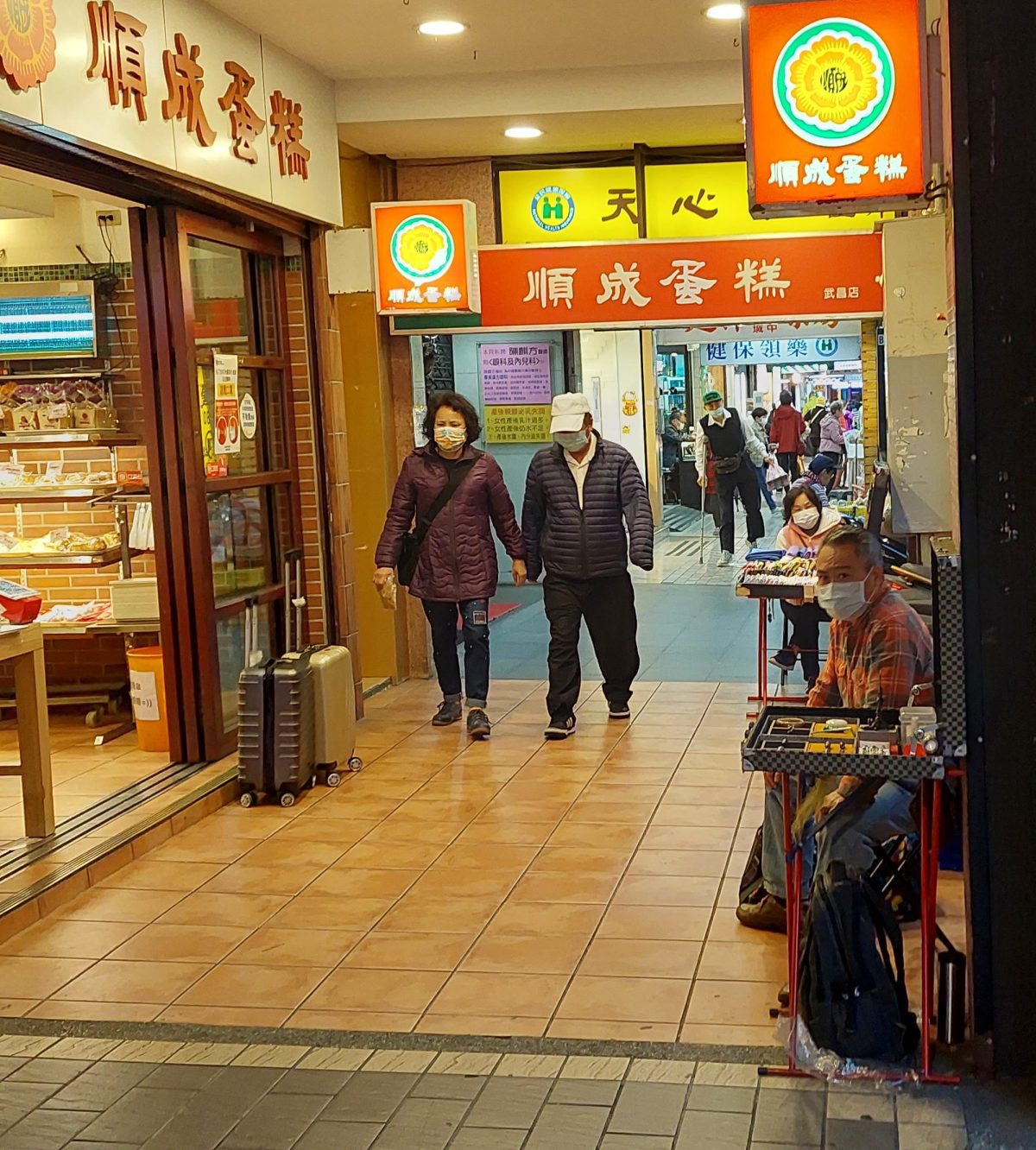 in the last installment of this series, i kvetched a bit about people who complain that taiwan has no architecture. in response, in this series of blog posts will look at what i call the architecture of making do–mostly the kind of vernacular architecture that one sees in the alleys of taipei and other urban areas on taiwan

however, i thought that i should begin with the most public and characteristic feature of taiwanese urban spaces, the architecture of covered pedestrian walkways 騎樓 cilou （also known as 亭仔腳 teng-a ka) found on major commercial thoroughfares

cilou are projections of the roofline of one story structures or empty volumes underneath second stories (which then project over the volumes) which provide a covered walkway. at times the covered walkway may extend all the way to the edge of the street; on larger avenues, the cilou may cover only a relatively narrow–perhaps one and three quarters or two meters–area, with another pedestrian walkway outside the cilou. in these bike riding times, often bike lanes appear in the outside pedestrian walkways. as noted by many observers of cilou, it’s not clear whether the cilou are a giving away of otherwise private space to the public space of the street or an occupation by private interests of the public walkway. detractors of cilou find their commercial and other uses an obstruction to walking, and certainly in many parts of taiwan, the irregular walkway heights of cilou make them unfriendly to those who rely upon wheelchairs to get around. lovers of cilou, however, find them both a comfort on rainy days without an umbrella–not to mention a flaneur’s delight

cilou give taipei and other urban areas in taiwan their particular sense of place and are suited well to taiwan’s semi-tropical / tropical climate. in taipei, which is one of the rainiest cities in the world, with the prickly rain of winter, sustained rain of the plum rain monsoons, and–just when you thought you couldn’t have more rain–wonderful thunderstorms and typhoons of summer, cilou make it possible to walk through the city without too much exposure to the elements. they also provide shaded places with ventilation in which people can eat, buy and sell clothing, and socialize. perhaps these features were more useful in the era before air conditioning; however, in the current pandemic and post-pandemic climate, the spaces provided by cilou fulfill many requirements for urban spaces

walking along cilou one gets a thrill of the changing sounds, smells, and sights as even the walking surface changes from storefront to storefront. the insides and outsides of private and public spaces blur and meet between small stands arrayed on one side of the cilou nearby parked motorcylces and the spillover from stores into the cilou on the other side. cilou house everything from sidewalk cafes to motorcycle repair shops. those who like a clear division between store and street might find such spaces an abomination. but cilou provide a strong contrast with the heavily walled and gated domestic spaces of urban residential alleys. rather than maligning the cilou, then, i wonder whether we might theorize from them about modern urban life from a taiwanese vantage

i say modern because the cilou is a product of colonial urban planning as much as an organic development. attempts to provide a history of the cilou generally describe the origin of the structure as we know it today in british colonial bengal, particularly the beniapukur district of calcutta. from there it spread throughout british india and malaya. japanese colonial planners may have brought the structures to taiwan, yet it’s just as likely that taiwanese merchants, who had kinship and commercial relations with southeast asia, would have seen the structures there. and cilou also have antecedents in the 18th century “no sky streets” 不見天 of lukang 鹿港, which were also covered streets, some with pavilions built above the street (hence the term 亭仔腳 , underneath the pavilion)

there’s argument about the history of cilou, but they become the dominant feature of taiwanese streetscapes in the japanese colonial period, along with electrification and other trappings of modern urban spaces. they fit the spaces of avenues with tree lined medians and also narrow streets of downtown taipei, and are features of nearly any urban area in taiwan, including market towns. although the earliest cilou around today date from the japanese colonial period, most urban spaces built until recently included them, as if to remove them would be an attack on the civic fabric.

(if anyone knows the history of dihua street–the wealthiest district in taiwan when the cilou were built there–this would be a good time to leave a comment with a bibliography. thanks! )

nonetheless, the cilou might be vulnerable to new trends in urban architectures and planning. districts in taipei that i would call non places, such as the wanna-be manhattan around 101, tend to lack cilou. and many new apartment buildings and commercial spaces actively occupy all of the private land, giving none to the walking public; alternately, they expend no private resources to maintain the public area of a walkway, covered at their expense. such landholders are, in my mind, both stingy and lacking in civic spirit. cilou are a public resource, as anyone caught in a rainstorm without an umbrella or walking on a torrid day yet too butch to carry a parasol will tell you. and what would taiwan be without eating bowls of noodles in a cilou, with pedestrians walking between you and the interior of the restaurant? maybe it would be more like manhattan; maybe that’s even what some taiwanese people want (but i bet that those people don’t know that all of manhattan smells like urine and that the subway there–well, let’s not go there)

to those who say taiwan has no architecture, i say: why don’t you stroll awhile in cilou, particularly in those adjacent to traditional markets? it’s not le corbusier, but it gives taiwan a modern inflected sense of place. think of it as taiwan’s own version of the arcades, which spawned baudelaire poems and benjamin’s theorizing