“Matrilineal” is really a codeword for the ways in which mimesis of settler forms does not extinguish ‘Amis claims to particularity and self-determination. But what else does matirlineal mean in ‘Amis communities?

By matrilineal, people around ‘Atolan mean neither uxorilocal residence nor belonging to the mother’s surname: “Times have changed! That was the old way!” By matrilineal, they refer to the way that women remain the agents of house building. In some ways, this agency features iconically in the construction of solafo.

One February evening, a group of my age mates sat in the side courtyard of ciAngayan, hidden from the street and those whose eyes are open for a free drink by Angay’s truck. A tarp covers us from the light winter rain. Angay’s wife, ciA-Cen, complains about her husband who, building vacation houses for Taipei people above the village, has not added a second story to her house. Looking up to the roof, you can see the steel rebar, the house structure hoping for the second story. One can guess that a stairway to the missing second story is inside the house, but ciA-Cen only lets family members and women enter. The men either urinate on the street or wait to go home. I’ve never seen the inside of the house, only the hopeful rebar that points to what has become an household need.

Our house is tiny, really.

It’s not pleasant to live here. I want to build my second story; that’s what I keep telling Angay.

Our children need a good nest, particularly, our eldest son–if he wants to get married, where will he live? We are all crowded into one story!

We joke that ciAngay will not build the second story lest ciA-Cen collapse from exhaustion. She complains already about ciAngay tracking dirt into the house–one of the reasons we cannot enter–if ciAngay were to build a second story wouldn’t she spend all of her time mopping? When would she have time to drink with us out here or after hours at the breakfast place where her friends work?

Angay’s wife takes comfort in her friends’ commiseration but feels jealousy, as well. One of her friend’s husbands–also an age mate of Angay–has built a second story. It is usually unoccupied, as the age mate’s son prefers to sleep in the living room on the first floor. Unoccupied, but not exactly empty, the second floor antedates a third generation in the age mate’s house. CiA-Cen worries about this eventuality, yet it does not escape those sitting around drinking that her children all live in Taypak and are likely to remain there. Thus the home provides more a site of return than residence. 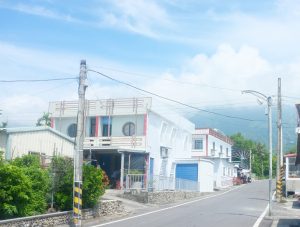 Loma’ retain hopes of expansion and return even as the family leaves the niyaro’. One day they will want to return and, every year they do come at least for kiloma’an. Many solafo around ‘Atolan feature a stairwell that leads to a yet unbuilt second floor. As it waits for the family to give it a reason for existence, the stairwell reminds family members who return after decades in Taypak or Takaw of the hopes they invested in the loma’. When ciPanay returns in retirement to live in one of the adjoining family houses and begin a restaurant in another, the stairway used for storage greets her every day. “When I make money, I should add the second floor, she says. For when people move back. For when my grandchildren get married.” These hopes, materialized in steel reinforced concrete, remain present in the solafo in ways that they could not in traditional thatch structures. The durability of solafo thus speaks to a durability of loma’ whose hopes and ethical ties, perhaps attenuated by labor migration, resist settler colonial attempts to eliminate them. 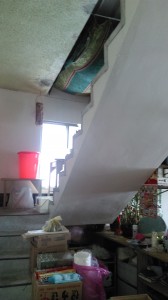 Thus, in response to the image from “My Mother is Melancholy,” we could also allow ourselves to be haunted by a sense that we do not know what the mother expects when looking at the picture. I once showed ciAkira a photograph that I found in Minsheng Pao of a faki who had been held in Indonesia for three years before the Ministry of Foreign Affairs could work out the return of an impounded boat’s crew. Activists such as those at the Fishermen’s Service Center had worked for the release of such crew members, and there was always some suspicion as I worked that documents about crews arrested or gone missing might surface in the Ministry, the Service Center, or some other bureaucratic agency. 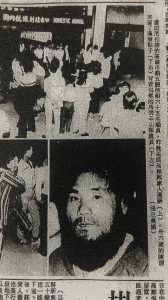 CiAkira thought so. He was haunted, in fact, by three of his classmates who had gone missing at sea.

“A-Te,” he asked, “Do you ever see documents about those fishermen who jumped ship?”

You know that many men on the boats went ‘missing at sea.’ What happened to them? I don’t think that they all died. Maybe some of them were killed by the captain or a shipmate or got washed overboard. But I wonder. My classmates who went missing, I don’t think that happened to them. No, they probably jumped ship at a harbor that they liked and decided to become citizens there, somewhere like Fiji or Las Palmas. They were strong, could find someone to give them a job, to let them marry in. I wonder where I could find out, what happened to people who jumped ship. I can imagine my classmates, living there now.

CiAkira’s musings suggest the possibility of not only “looking like a foreigner,” but actually becoming one. This possibility was not unacted upon. Although most men on the boats did return, the figure of jumping ship continues to haunt them. ciRahic, whose father was on the boats, jokes that we are brothers, his father having met my mother in port. CiKiciw, now in his sixties, says that perhaps if he had jumped ship he would be an “A-Te’s” father. Looking at her son’s picture in the narrative, the mother might not be melancholy but wistful, remembering the past but also imagining a life far from the niyaro’. Perhaps he would return, a little A-Te in tow. They would might need a third story for the solafo.

In his critical discussion of decolonizing praxis, Corntassel (2012: 89) cautions against multicultural performances of political inclusion:

Decolonizing praxis comes from moving beyond political awareness and / or symbolic gestures to everyday practices of resurgence […]. This shift means rejecting the performativity of a rights discourse geared toward state affirmation and recognition, and embracing a daily existence conditioned by place-based cultural practices.

Such a focus on place informs the work of many other critical scholars (cf. Coulthard 2010, Rifkin 2017), resonating perhaps with work on Austronesian “house societies” (Blackwood 1999, Carsten 1995, Errington 1987, Fox 1993). Criticizing what he calls the “repro-sexual” ideology of Federal Indian Law, Rifkin (2017) notes that Federal Indian Law “despatializes Native identity and, thus, translates place-based indigeneity into a matter of lineage” (175/ 283 in google book). In contrast, Rifkin calls our attention to forms of kinscapes (Macdougall and St Onge 2013) that do not displace the “geopolitics of self-determination as peoples based on a prior landedness” (191-192 / 283).

In my work, I would like to expand these discussions of place-based cultural practices by examining kinscapes that articulate with (and through) settler colonial power and global fisheries labour. Although, settler colonial projects of social amelioration did also attempt to transform ‘Amis kinship to conform with settler notions of genealogy and genealogically transmitted culture, ‘Amis practices of malatamdaw (becoming human) connected to house building in ways that expand beyond the place of the niyaro’ / bulo. This may be because settler spatial governance reduced place to a carceral structure in which “mountain people” only appeared as a problem to be managed. In other words, the “place-based practices” through which indigenous people maintain relationships to land and each other could be expanded to projects that operate at a larger scale than that of villages or traditional territories. ‘Amis house building conjoined practices of dwelling with those of oceanic travel and associated cosmopolitan imaginations: a complicated, expansive project.

These expansive gestures are often illegible to those who long for “natives in place”–but that is the point. ‘Amis house building presents a kind of refusal to be confined to the niyaro’, reduced to dependents living, if they can be said to live, either in some version of the primitive past or a vision of modern assimilation. This refusal to be confined to one place is evident even as the houses materialize desires for return. On Taiwan, representations of limited, circumscribed indigeneity ironically perhaps fold into broader anxieties that the island country is too small and must depend upon the economy of a belligerent neighbor on the one hand and the military of a distant and fickle friend on the other. Nonetheless, Hau’ofa’s (1994) insight gets at the unexpected but real movements through which indigenous people today survive. It is a shift of perspective that calls our attention to vernacular scale making projects through which people poach upon, evade, and riff upon settler colonial institutions to create their own networks of survivance.

Today, when indigenous people are more often accused of a failure to be truly indigenous because they live in solafo, attention to the expansive project of house building in ‘Atolan and other ‘Amis communities might offer an escape from the strictures of localized, neo-traditionalist frameworks that have replaced assimilationist dependence with a culturalist one.

Yet, I wonder if I have told too much. Perhaps the point of the nearly successful mimesis of vernacular settler architecture is to keep these hopes invisible to prying types who need not see them. The author of “My Mother’s Name is Melancholy” had other hopes, many now realized in post martial law Taiwan, others foreclosed by belittling images of Taiwan as a small country on the margins of China. If I let her image haunt me after it has outlived its political utility, it is to register hopes that, while invisible, persist beyond settler arrogation of kinship reckoning, that insist that loma’ have a future, ever expanding if entangled.