Taiwan’s Tsai Ying-wen administration began with several large promises to transform the way that the government interacted with the populace. In relationship to indigenous groups, these promises included the startling performance of an official apology, on the part of the Republic of China (Taiwan) government for four hundred years of settler colonialism. The official apology was unprecedented (and rare among settler colonial governments–the United States government has never apologized to North America’s indigenous nations). It was for many a source of hope. However, the apology has been followed by ongoing indigenous demonstrations on Ketagelan Boulevard, in view of the Presidential Office Building. If you are like many Taiwanese people, you might think that an apology is enough. Why don’t those protesters get over their resentment? Why don’t they engage in reconciliation?

Let me then ask what you mean by resentment or reconciliation. As for the latter, a type of illusory reconciliation, in which the settler colonial government offers symbolic tokens but never limits or discards its right over indigenous lands (in the name of needed development, for example), fails to stage a real remaking of relationships among settler colonial institutions, indigenous institutions, the ancestors, and the land. What we need are not symbolic acts of recognition but real material practices, praxes in which we create new norms for new relationships. Discovering such praxes is part of indigenous struggles with–and here we could mean alongside if the conditions were right–settler colonial governments. The Ketagelan Boulevard Village was a short-lived space of experimentation with this kind of praxis. Its removal by police on the 2nd of June was a missed opportunity 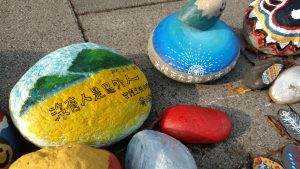 Leaders of the protests, including the Pangcah (‘Amis) documentary film maker Mayao Biho and contemporary indigenous singer songwriters Panay Kusui (‘Amis / Puyuma) and Nabu Husungan Istanda (Bunun), argue that such apologies are not enough. What good is an apology when the Indigenous Basic Law, on the books for more than ten years, has not been implemented? Once the ritual of apology concludes, is it possible for the government to continue with the business as usual of facilitating tourist and other development of indigenous lands? to continue to store all of Taiwan’s nuclear waste on Pongso no Tao? to refuse to indigenous communities administrative reality?* What, in fact, might reconciliation mean, if anything, in this context? 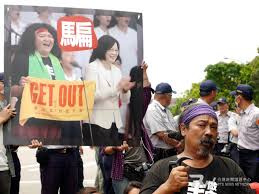 There are many reasons to be skeptical of the politics of recognition and reconciliation. In his Red Skin, White Masks, Yellowknives Dene scholar Glen Clouthard has observed that the shift toward “reconciliation” in multicultural polities such as Canada abets rather than ends colonial dispossession. Touted as a means of mutual acknowledgement and making everything right (i.e., transitional justice), the politics of reconciliation serves to dismiss indigenous struggles for sovereignty. What’s more, such discourses attempt to define indigenous protest as pathological resentment. Focusing on this issue in a 2013 talk on the Idle no More Movement, Clouthard argues that settler colonial states manage indigenous populations by “offering false promises of a new relationship or partnership through formal recognition of our rights; but then, in practice, the government proceeds to trample these rights”

Given such blandishments and sweet promises of inclusion, Clouthard finds that resentment–indigenous people’s refusal to smile and dance for the government–may serve as a critical resource. Rather than buying into a process of transitional justice that does little to change material realities, Clouthard remains an “affect alien.” Panay, Mayao, and Nabu seem intentionally to remain outside the happy party of the included as well. For the past 100 days they have camped on Ketagelan Boulevard, returning after at least two forced evictions.

We might usefully compare Clouthard’s argument for anti-colonial rage in Canada to the situation on Taiwan. Happy to be included are a variety of professional aborigines, including several of those appointed or elected to government posts. Promoting the false promise of partnership, the Council for Indigenous Peoples channels indigenous energies into cultural activities that largely distract from the material realities of colonial dispossession. The government will not return the land, but will include you on the sides of trains, as dancers at public events, and other performances of a multicultural Taiwan. Local communities will not be able to control the school curriculum, but the charitable government in its wisdom gives an hour of “mother tongue education” to schoolchildren (and creates an entire testing industry around certification in indigenous languages). Indigenous customary use land might be leased by the government to developers, but there will be jobs aplenty, so they say, in the resort hotels. Apology serves as a cover for dispossession, but we are supposed to be as happy as clams. Yes, happily everyone’s culture can be included–will be included. Hallelujah! What is there to be resentful about?

One hundred and one days ago, the Ketagelan Boulevard Village emerged in the shadow of the Presidential Office Building. Those who organized the village responded to a land law that failed to measure up to the promises outlined in President Tsai’s apology. Proclaimed on 14th February, the Draft Indigenous Land Policy would revert 800,000 hectares of land currently classed as government land to its traditional owners. Implementation of the policy will likely be stalled, as indigenous communities still lack administrative reality on Taiwan.* Moreover, the draft policy explicitly excludes those lands under private ownership. For this reason, approximately one million hectares of land that should belong under indigenous oversight disappear from the bill.** Protesters of the draft policy argue that the policy thus legitimizes theft

From the vantage of indigenous communities such as ‘Atolan, where I often reside, the draft bill also offers no protection against developments or business practices that violate community standards. Thus the Kakitaan and Mikomoday of the ‘Atolan ‘Amis Nation proclaimed their own land policy following the Council for Indigenous People’s release of the government’s policy. In the statement ‘Atolan’s leadership reiterated their sovereignty over all land in its traditional territory–including both public and private lands. Such a move is necessary in ‘Atolan given increased development pressures, not to mention crises surrounding marine resources management in the community.*** 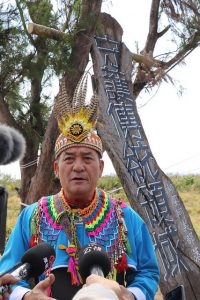 the kakitaan of the ‘atolan ‘amis nation proclaims sovereignty over traditional territories, 28 february 2017

Again, there are many people who might say, “With this positive movement forward to recognize indigenous land rights, why should indigenous people protest? Why do they feel resentment?” Such a question misses the mark. Why should indigenous people congratulate the government for “returning” something that never belonged to the government in the first place? Secondly, the bill stops far short of recognizing indigenous sovereignty: if indigenous communities cannot have oversight over privately owned land, then what status do they have in relationship to settler colonialist institutions more broadly? Certainly not enough to challenge county and township governments eager to cooperate with investors to “bring development” to indigenous lands. The protesters resentment is that for the price of joint management of government land indigenous communities are being asked to give up their ambitions to restore indigenous ethical codes that govern relationships between people and the land. 800,000 hectares is thus far too cheap. The policy would ask indigenous people to bow to private property rights imposed by settler colonial governments and would lead to further erosion of indigenous norms. Should indigenous people dance with joy? 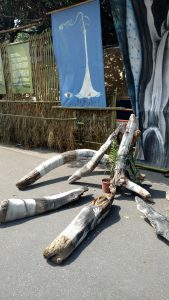 image of an art installation at the ketagelan boulevard village, 1 june 2017. photograph djh

The Ketagelan Boulevard Village grew as an assortment of tents and installation art by a large group of indigenous artists, expanding into concerts and teach ins. As the village expanded these features, including stones painted with images and words, drew people to see the public art and to learn more about the protests. The residential and artistic components of the protest village marked it as an urban indigenous space located, appropriately, on a street named for the Taipei Basin’s indigenous people 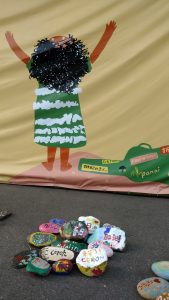 Within the space of the village, its art and its teach ins, one could begin to observe a relationship to the broader public that diverged from an illusory reconciliation. It was an open space of struggle, configured not primarily as protest as a set of symbolic acts, but a kind of material practice, including art, but also everyday life. Along the sidewalk and in tree wells, the protesters planted sweet potatoes, samah, and other indigenous food plants, reminding visitors who knew the plants or who might ask, that relationships to the land are not abstract relationships of hectares, productivity, and development but ethical ties of caring and nurture. The land gives much to us and should be within the sphere of our relationships of care. Not an object of our economic development, it is rather a subject connected to us through cultivation, gathering, and eating. 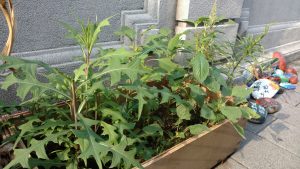 samah growing at the ketagelan boulevard village. growing wild vegetables points to indigenous land practices that could be the basis for real reconciliation. photograph djh

The practices of art and residence at Ketagelan Boulevard Village thus pointed to the set of material struggles over land and our relationships to it. If the government were not so quick to remove the village, officials–including those of the CIP–could have learned how truly to move toward transitional justice on Taiwan. But those officials seem earnest, but not so eager****

The Ketagelan Boulevard Village was removed (once again) by police on its 100th day, 2 June 2017. I only hope that the police left the sweet potato greens

———-
*note: legally taiwanese indigenous communities have the status of voluntary organizations. movement toward the reorganization of indigenous communities as legal persons (corporations) has gained momentum as a first step toward local autonomy; however, unlike indigenous communities in new zealand, australia, canada, or the united states, taiwanese indigenous groups do not have treaty rights vis a vis the settler government. education and natural resources policy on taiwan are both highly centralized, further blunting indigenous self government. much positive work on the part of CIP has been toward greater recognition of indigenous community authority. but there are limits imposed by an administrative structure that sees, for example, “gangkou village” as an administrative unit but renders the laeno pangcah community (roughly coterminous with “gangkou village”) invisible except as a cultural association

***the exclusion of privately held land from the oversight of the ‘Atolan community authorities is the issue to the kakitaan and the mikomoday. because i am bound by my relationship with the ‘Atolan community to support the decisions of the elders, kakitaan, and mikomoday, my statement about the land issue merely reports their position. this position is similar to those of the Makerahay Pangcah and Makota’ay Pangcah communities; however, how other communities have responded (or not) to the Ketagelan protests is outside of my purview. perhaps someone else can comment?

****such struggles include struggles with people like me who are academic observers, who need to relearn at times how we approach issues of history, conservation, and everyday life