good shows can get one to think differently about a collection. the recent gardner show ListenHear takes steps in that direction, through a couple of provocative site specific sound pieces. in this blog, i’ll talk about moritz fehr’s intervention into a famous 1990 art theft, in which fehr poses questions about art, memory, and sentiment. in the next piece, i’ll take up lee mingwei’s equally interesting small conversation

it must be rough as a curator at boston’s isabella stewart gardner museum. although the collection is interesting, it has several challenges. most formidably, the placement of all of the objects in the collection, once specified by the museum’s founder, cannot be moved. as a result, the museum strikes one as a somewhat fusty club. it aims, i think, for the cloisters but ends up missing the mark. whenever i visit, i think that it would have been better if gardner had been even a bit more self-absorbed, or perhaps self-absorbed in a more whimsical way; then the museum might have reached the eccentricity of museu frederic mares in barcelona, with its collection of opera glasses as well as the obligatory pietas and madonna with childs. as it is, the gardner is beautiful but does not afford much of what visitors today expect from museums. what’s more, the museum  collection is missing several of its most valuable pieces (more on that later)

the curators probably fret a bit over this problem and have taken on several interesting projects, one including something that can be modified within the constraints of the gardner space, sound. the  exhibit ListenHear, now at the gardner, brings together several on-site sound works, most site specific, and a few offsite (a walking tour of the back bay fens and a piece installed in streets around the ruggles mbta orange line stop).

among the site specific pieces, moritz fehr’s work undertone (single channel sound installation 12 minutes, 2017) relates closest to the history of the collection. many people who have never been to the gardner know that the museum was the site of the heist of the century, in which two men dressed as police officers lifted several pieces, including vermeer’s “the concert”

once in a special frame that allowed visitors to sit in front of the picture, now the canvas is missing. the chair and empty frame keep vigil, as the piece–or the lack of the piece–is left the way it has been since the theft 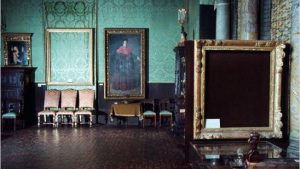 making a piece about this work might be tricky–after all, the theft has been parodied by the simpsons 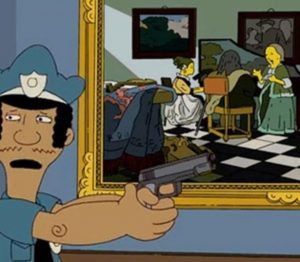 fehr’s undertone plays with the traces of vermeer’s world in the piece as well as traces of the piece in our imagination. although both are absent, we can strain to hear the remembered voices of harpsichord and vocalist, whispers of people who have seen the piece at the gardner, and other memories that remain. the blank frame indexes these memories for us, as if the inability to conjure an image to fill the blank frame, like our inability to remember the face of an absent loved one, might trigger other memories to supplement for the lack.

if as alfred schutz noted, music is a meaningful context in which we can share time with those absent, making michel lambert a quasi-consociate during the performance of his setting of “ombre de mon amant,” then what does a recording of lambert’s “ombre” coming from the empty frame of vermeer’s “the concert” do? might it provoke some pleasures of the absent painting through association? fehr’s piece is thus a provocation for those who visit the gallery to think about art beyond the simple iconism of realist art (“this is a picture of a concert”) or even the position of vermeer within art history or the art market (“most valuable piece of art ever stolen”). it calls us to think about art in a kind of sentimental circulation