some collections are about intimacy of conversation and shared viewing. boston’s gardner museum is this sort of place; not only is it best to go with a friend to enjoy the courtyard, it is difficult to understand much about the art without a guide. yet, as i’ve mentioned in an earlier post, the gardner strikes me as a fusty place, a harvard tie squash club where it’s hard to feel connection. lee mingwei’s site specific work small conversation (multi-channel sound installation, 2017), installed in the gardner courtyard as part of the group show ListenHear gets at the problem of connection among people in, with, and beyond the museum. it’s a work that draws on his earlier practice and that for observers of taiwan soundscapes might invoke just a little bit of nostalgia

lee mingwei, a taiwanese artist now living primarily in france, has worked at the gardner before. the gardner commissioned his 2000 multimedia installation “the living room,” which felt like the gardner at a small scale. in the piece, he invited people to bring their most treasured collection to the gardner to “host” the living room in which visitors would look at the pieces and interact with the “host,” who served as a sort of guest curator. the piece recalled that the gardner museum was in fact such a large scale living room to its founder, isabella stewart gardner, who hosted many in boston’s literary and art scene 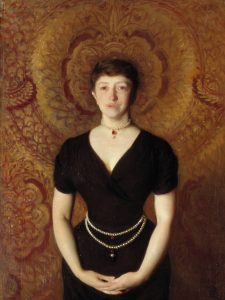 it is curious, however, that lee’s piece now at the gardner is in sound. most of lee mingwei’s work has been conceptual or activity based: he is famous for pieces in which he cooks dinner, mends clothes, or sleeps beside visitors / participants. in a 1998 piece at the whitney, he asked people to write letters they wished they had sent. he has also made pieces in which he asks people to take objects from the installation and give them to people they encounter on their way to their next destination. as such, lee’s work concerns various bids or searches for intimacy, for shared stories, restored connections, or occasions for giving. site specific sound installations would seem to lack the material and active qualities of most of his work so far. so i found the piece an interesting departure

small conversation takes on the courtyard, which is one of the highlights of the museum, a focal point where visitors can relax, mingle, and–this is why i visit the gardner in the winter–feel surrounded by tropical greenery. sure, the fens are nearby if you want nature of the reeds, muddy river, and urban geese that never migrate variety; but the courtyard is a postage stamp collection of flora from a more southerly clime. what’s more, it contrasts with the low light, heavy wood, and stone of the palacio. the courtyard sets up a number of contrasts between social focus and conversation versus quiet, introspective contemplation of art in the palace’s other rooms; manmade objects versus natural growth. it’s to these contrasts that lee adds his work in small conversation

small conversation makes us eavesdroppers in a sense. the conversation, as it turns out, is of amphibian and insect love discourses, the sibilant thrum of cicadas and creaky songs of frogs. because viewers cannot see the speakers, which are positioned all about the courtyard, we would be apt to think that possibly a band of frogs and cicadas had taken residence in ms gardner’s courtyard, there having quite the conversation. if we understood frog, we might know if they were talking about the art or the latest gossip from the pond. it does not matter: we get a glimpse of other creatures trying to make intimate connections across the space of the courtyard which divides them. might we then too, give more space to the humans doing the same around the courtyard or through the art? permit ourselves to use our own languages or media of affection to connect with others?

sounding is not only a means of connection at the intraspecies level, but is also how we might develop relationships of care with the other creatures (and landscapes) with whom we share the earth. lee also turns to this question in small conversation, but in the negative, showing how urban noise and distraction keeps us from making such connections

in the artist’s statement, lee turns more toward nature in his talk about the piece. he wants us to think about the sounds of nature that get drowned out in urban traffic. we can observe an example of this effect just steps from the gardner museum’s doors. although the museum is set beside part of the emerald necklace, the sounds of automobiles along the parkways and nearby city streets blankets the sounds of this urban park. but here i wonder a bit about the piece; after all, the sounds in the installation are not those we are likely to encounter in boston; rather, they fit the kinds of sounding critters one would expect to go with tropical plants. and some of those amphibians and insects can hold their own against city traffic; even in population dense and well over 70 decibels at all times taipei, one can hear the cicadas as they seek out their mates. visit the 2/28 peace park in july and hear the cicadas over the scooter engines. i’m not sure about frogs, but they seem loud to me, too

maybe the point is that we do not attend enough to these natural sounds or that they are caught within the general “lo-fi” mix of urban soundscapes. for me, the piece did bring back many memories of frog songs and cicadas in taiwan. lee is not known for dealing in connection to home, but maybe the memory of frogs associated with the set of plants and the water feature in the courtyard did inform the piece. it’s more likely that the turn to nature in this piece fits a broader concern with connection that lee explores

as you see in the deleted comments above, i was taken in by one of the features of the piece. as i later learned through an interview that lee gave with boston public radio station WBUR, the source sounds in small conversation are not field recordings. it turns out that from his childhood, lee loved to imitate the calls and songs of sounding creatures in the bamboo grove behind his home in taiwan. he admits that although he seems to have frog down, he cannot do justice to the sound of cicadas. the imitated calls, for lee mingwei, correspond to the human hand in the gardner courtyard: it’s a tropical oasis, but a human managed one without the usual insects and other critters. we might wonder whether lee’s imitated calls speak to a human desire for a less mediated relationship with nature, which the gardner museum’s courtyard could also index, albeit through the lack of sounding non-humans? what might that say about our relationship to nature as urban dwellers today?

still, as someone engaged with sound installation art, i wonder why of all the pieces in ListenHear, only a couple are experimental or non-representational. it may be that anything site specific in the gardner becomes a bit conservative or representational in relationship to the art. i wonder what it would feel like to create something site specific at the gardner that would not be representational. yet, it was a good show to give a listen. this group show at the gardner highlights the museum’s collections, sounding them out in ways that allow us to rethink and revisit a tricky collection