although our sinophone neighbors hardly ever mention far oceaning, unless they have connections to tungkang or kaohsiung’s caoya harbor, far ocean narratives did enter into national imaginations as well as local ones. as they made this passage, these stories would become amplified, but also reduced symbolically, appearing as a yet another case of national failures

appearing only as they did in cases in which foreign navies seized boats and arrested crew members, far ocean narratives that made it into the national media provided a means to imagine a set of shared restrictions and limitations faced by taiwanese as the island country’s bid to represent china began to unravel. the stories contained intimate dramas of painful waiting and tearful reunions, bringing home a set of otherwise relatively abstract concerns about taiwan’s international status

so there is a connection between what might otherwise appear as two parallel narratives that could be told about far oceaning. diplomatic woes and domestic tragedies seem here to come together 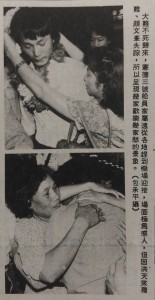 human interest: an image from china times shows the homecoming

take the case of the chian-der #3 (憲德三號), a longline squid boat working waters claimed by argentina but part of a british claims around the falkland islands. on 30th may 1986, an argentinian coast guard ship attacked and sank the chian-der #3. two deaths and several casualties resulted. those surviving the attack were imprisoned in argentina for a two weeks before returning to taiwan. the incident, aggravated as it was because of the uk – argentina disputes surrounding the falklands, immediately became a larger story than just a taiwanese one. reported in the guardian, by the ap, and in el pais, as well as the taiwanese press, the attack was one of the only times taiwan entered international news in 1986.

on taiwan, the incident was newsworthy enough to interrupt coverage of ongoing political struggles at the end of the martial law period. it even trumped reporting from the world cup

reporting of the event first expressed horror and outrage at an attack on an unarmed fishing vessel, then moved on to ask questions about whether the ministry of foreign affairs was doing enough to secure the safety of the country’s far ocean fishing fleet, as well as those unfortunate men still imprisoned in argentina. as it turns out, this event was not an isolated one. hundreds of taiwanese boats had been impounded, their crews arrested–some for years at a time–for a number of violations. partially, these arrests reflected a new international order surrounding ocean resources. in the late 1970s and early 1980s, many countries began drawing up 200 nautical mile exclusive economic zones around their coastal areas. unfortunately, maritime authorities in other countries made this territorial claim just as taiwan’s far ocean fishing fleet expanded. the fleet had become an important source of revenue and even a symbol of taiwan’s economic advances. with the territorial claims, new international agreements would have to be drawn up. but the republic of china (taiwan) had, by 1986, lost nearly all of its international representation. with few diplomatic allies and no UN presence, negotiations over fishing rights were complicated 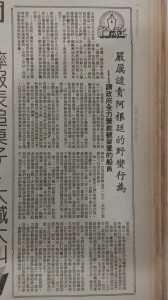 national concerns: a taiwan times editorial connects the event to the problem of the republic of china’s lack of international recognition

also complicated were negotiations with countries, such as indonesia, where many taiwanese fishing vessels had been impounded. news reports on the chian-der #3 incident often asked, “is it just taiwan that’s being bullied here?” the answer turned out to be a bit more complicated. fishing vessels from even the united states had been impounded or treated aggressively. nonetheless, the difficulties the ROC (taiwan) faced negotiating, particularly in cases like the chian-der #3 incident, provided an allegory of (inter)national failure. images of the crew returning with a national flag and news coverage of new policy drafted in the wake of the incident made far oceaning part of a national narrative. somehow it was not just a story of the crew of fishing vessel that may have violated argentinian waters but the story of taiwan, now feeling its vulnerable insularity 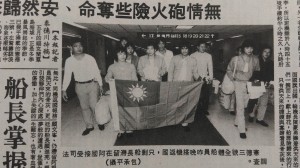 claiming space in a national narrative: an image from united daily news shows the crew returning from argentina

it’s not clear to me whether in carrying the flag, the crew was making a bid for recognition of their travail as part of an ongoing national struggle; of course, there are many kinds of emotions bundled in the “white sun set in a clear sky above a bloody ground.” besides, newspapers also reported on the human interest side of the story: how the widows of the men who died in the incident responded to the news, the terror felt by the crew during the attack on their boat, and the joyful feelings of return. because of the newspaper format, these kinds of stories get juxtaposed with each other, as in the following image from the now defunct kaohsiung based newspaper, taiwan times 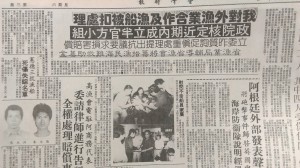 national concerns: beneath a story about policy responses to the incident we see an image of the grieving widow

interesting to me, as well, is how the human interest photographs focus not just upon the families meeting the men at the airport. indeed, a repeated image of the incident featured the child of the boat’s captain, who remained a few days longer in argentina, on a long-distance phone call, the young mother holding the son on her lap, eyes directed toward the receiver. this image, so perfectly composed if objective and unintentional in the photojournalistic manner, wants our eyes to rest on the mother’s hand, holding her son across the chest, repeated in the son’s hands cradling the large phone receiver. to my eyes, the image resembles marian iconography and as such the image adumbrates an instance of maternal care, creating a symbol of the event and national responses to it. the eyes of both the son and the mother focus on the receiver, underscoring the absence of the ship captain father. drawing readers into this intimate moment, the image also creates a sort of empathy: what would it be like to have one’s loved one imprisoned in argentina? 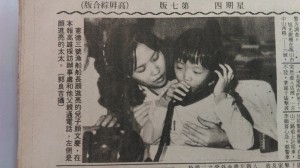 human interest: the son of the ship captain on the phone to argentina

these moments of empathy and affect work to create a sense of thick relations among members of a broader taiwanese community. in other words, national imagining derived from common consumption of media products in a vernacular language (what we might call the form of national imagining) seems less powerful here than the way that the reportage shuttles between domestic tragedy and national shame. in similar ways, far oceaning narratives would also become vehicles for popularizing the cause of the early indigenous rights movement, which began in taipei but soon turned its energies toward the plight of far ocean fishermen and their families

in both cases, far ocean narratives begin to speak for a broader subject: in the case of united daily news, taiwan times, and minsheng daily, and china times, those newspapers that i’ve looked at here, that subject was the late martial law republic of china (taiwan). indigenous activists, for their part, would create from these and other narratives an emerging subject, yuanjhumin (indigenous people) in opposition to official designations of taiwanese indigenous peoples as “mountain compatriots”

how did the interpretation of these narratives in national and pan-indigenous media work to create this broader subject? might we discover something of the deictic strategies that these interpretations employed?